One of the most famous touristic sites is the islet of Es Vedrà, located southwest from Ibiza, in front of Cala d’Hort in the area of San Josep de Sa Talaia.

This small island is known for its important ecological value and for being accredited as natural reservoir since 2002.

It belongs to the ensemble of the Parc de Cala d’Hort and Es Vedrà, composed of Es Vedrà island, Es Vedranell and the Es Illots de Ponent. Curiously they belong to about thirty families.

Ibiza Villa offers a selection of luxury villas with stunning views, contact us for information or reservations, we are here for you!!

In the last years, many people have believed that this piece of land has magical properties of energy accumulation and special powers.

Many persons assure that have seen UFOs and mysterious lights flying over the island. Some books collect testimonials of fishmen saying that they have seen some lights

going in and out from the water including passing below their vessels.

Someone also called this area the Mediterranean Bermuda triangle, including the southeast coast of Mallorca and the Peñon de Ifach in Alicante.

In fact, in 1979 the Manises case took place, when a commercial airplane supposedly was followed by a UFO and was forced to land.

The locals believe that this area has a attraction power, but at the same time they also humorously comment that all this might be caused by the hallucinogen “trips” of the hippies.

Anyhow, what remains true is its important ecological value thanks to its wide variety of endemic species, unique and indigenous.

It is also remarkable that this is an important breeding location for seabirds, predatory birds and a natural reservoir for marine life.

Considering that it is prohibited to construct in this area, neither perform any economical activity, this small island has been in the past and important colony for goats,

nowadays disappeared and become a legend, even though their actual presence is more than proved.

Do you want to rent a boat and sell the island of es vedra ?? Call Ibiza Villa and book one of our services.

Its pyramidal shape and its 382 meters of size above sea level make this islet easily visible and recognizable from many sides of Ibiza,

Formentera, and during clear days, also visible from the peninsula. Some spots from where you can see the island are:

And how the big question: Is it possible to visit Es Vedrà? Unfortunately, it’s totally forbidden and there are only special permits in specific circumstances.

From Ibiza Villa we suggest you rent a boat to get a closer view by sea of this small islet and its four kilometers of perimeter. 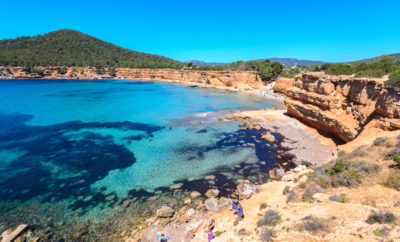